We are very proud of what TEGA has grown into over time.

We always had a vision for this business, and that vision is coming to fruition through the consistent addition of quality programs, quality people, and quality facilities. We continue to improve our existing programs and are ready to develop the programs of the future that will benefit the parents and children of Lubbock. We look forward to becoming an invaluable asset on your journey of raising the precious children of Lubbock and the West Texas community.

TEGA opened its doors in 1995 with 40 students, 30 of which were part of our competitive team.

Our dream was to bring the sport of gymnastics to the boys and girls of Lubbock in a way that had never been seen by the community. TEGA is one of the largest Junior Olympic training facility in West Texas. In fact, our state-of-the-art facility rivals many clubs throughout the state of Texas. We have always been truly dedicated to the development of our young gymnasts, and gymnastics continues to be central to all of our programs!

By the mid-2000’s TEGA had expanded to twice its size and added program options.

We began what has become one of our most popular programs, Kid’s Day Out Summer Day Camp (KDO).  When your days are filled with indoor and outdoor sports, games, gymnastics activities, swimming, art activities, and so much more, it is hard to find a program more suited to today’s active kids. With the success of Kid’s Day Out came the addition of Palaestra, our full and part-time childcare program. Palaestra is designed to provide high quality care in a safe and nurturing environment that promotes physical, emotional, creative, social, and cognitive development for children. We then saw a demand for after school care. Parents wanted more for their kids than an afternoon sitting in a cafeteria or inside a daycare facility. TEGA met this need and ASC continues to thrive today.

This decade started with our desire to build a NEW and improved TEGA.

This process would include fostering current programs while expanding in a few other areas. In the 2000’s TEGA added  swim lessons, a dance program, cheerleading options, and Ninja Zone. The process of building a facility like ours is a long road, but a challenge we welcomed. As we approached 2020 things were shaping up nicely. This was also a decade to reflect on how far we had come and to give a nod to all those students and employees that had been a part of TEGA over the past 15 years.

With the green light to start building, we were ready to break ground on the facility of our dreams! Little did we know that 2020 would not just halt our plans but decimate them. Faced with a struggling business and the unknown of living through a pandemic, our leadership and loyal customer base rallied and did a complete 180 to help us recover and set us on a new path.

Today we are on the brink of opening not one, but two new facilities.

In May 2022, we will open a gymnastics-centered facility off of South Indiana Avenue. In August 2022, we will open a 30,000 square-foot facility at 7788 Milwaukee. These facilities represent what we always wanted when we started this journey in 1995, but also represent all we have learned along the way. We just passed 25 years in business and look forward to what the future holds for TEGA Kids! We hope you will be part of this next chapter. We will always be thankful for the people who have blessed us by being part of our lives – the list is long!  To be continued…

Jeff and Michelle Dow are the founders and owners of TEGA Kids.

Together they have been involved in the sport of gymnastics for over 40 years. Jeff, a native Texan from Austin, began his gymnastics career at historic Crenshaw Athletic Club, where he was a Texas State and Regional champion, as well as a U.S. Junior National Team member.  It must be noted that Gil Elsass, Jeff’s coach and the owner of Crenshaw’s, provided much of the inspiration and blueprint for what TEGA has become today. After receiving an athletic scholarship to The University of Iowa, Jeff became Team Captain, All Big Ten, and NCAA All-American, as well as earning a spot on the U.S. Senior National Team.  It was at Iowa where Jeff met Michelle, a six-time Regional and Western National qualifier from Denver School of Gymnastics in Denver, Colorado. After arriving on the Iowa campus on a full gymnastics scholarship, Michelle became Team Captain, a four-year Big Ten Championship event finalist, and Big Ten Bars Champion.  After moving to Lubbock in 1992 to pursue their graduate degrees, the couple’s love for gymnastics and the well-being of children led them to open Texas Elite Gymnastics Academy in 1995.  After successful careers as the Head Coaches of both the TEGA Girls and Boys competitive gymnastics teams, they have concentrated their focus on developing TEGA Kids into the finest children’s activity center in West Texas. 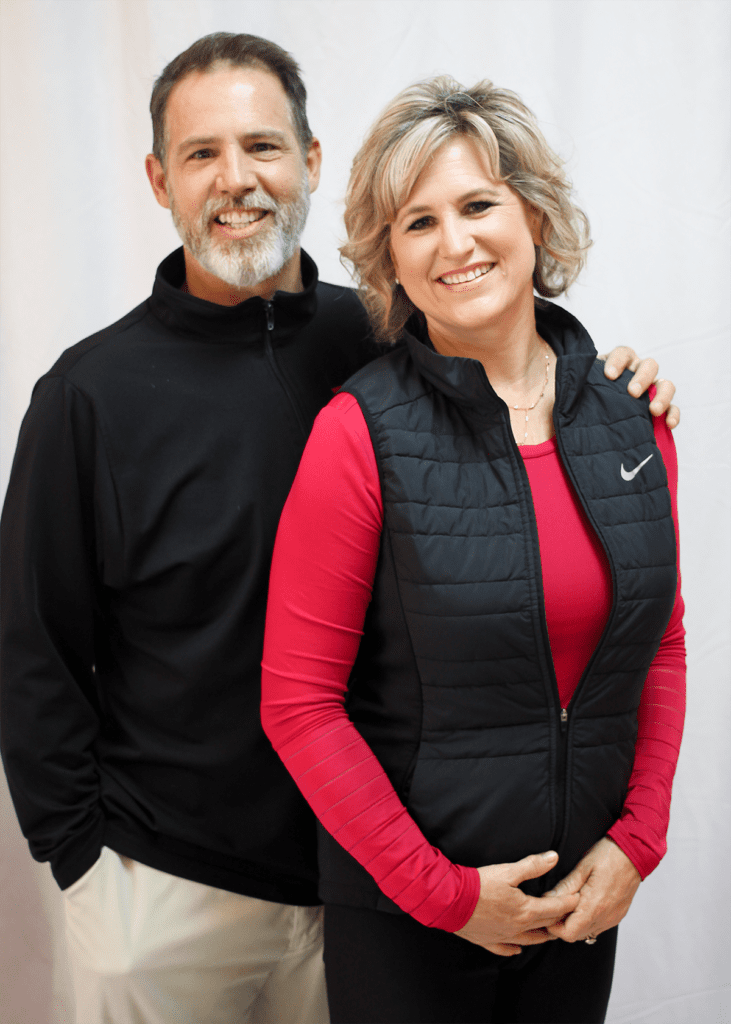